Destiny : Through the Lens of a Single Player Game


In his GDC talk, Justin Truman from Bungie mentions that one of the goals for Destiny was to make a multiplayer game that had all the juice of a single player FPS. In this blog, I'd like to look at the moment to moment gameplay that creates this juice. Zooming this lens out a bit more, I'd also like to look at how Destiny 's features reflect or contradict some of the larger trends in the FPS genre. These trends are explained brilliantly in Justin's Pierce's Gamasutra blog here.

THE ZEITGEIST OF FPS

In his blog, Justin argues that the paradigm shift from PC to console and therefore mouse based input to controller based input is the root cause for changes in minute to minute gameplay. 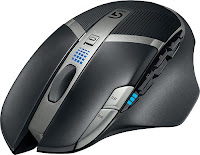 Essentially because the range of allowed input is greatly reduced when moving from free form mouse movement to thumb based joystick rotation, games slow down combat so that it's easier to track targets using a controller. This then necessitates mechanics such as sprinting to speed up non combat situations, aim down insight for targeting assistance, and OP melee attacks to counterbalance being flanked in close range by charging enemies. Now digression aside let's return to Destiny.

One of the cornerstones of Destiny's combat system is a sense of tension. This tension is largely elicited by keeping the player on her feet at all times. It's neither enjoyable nor possible to be successful in a Destiny encounter if you're camped in a location trying to take out enemies one by one. The indirect control over player motion is governed largely from the relationship between player and enemy attack ranges. 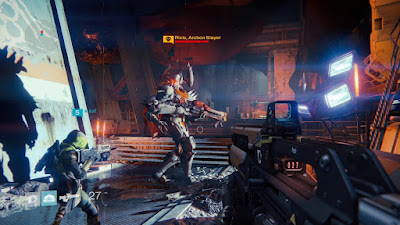 By establishing a default play style mode of sorts, the game then puts itself in situations where it can surprise players by breaking pattern. Melee attackers are used more as a tool to break player flow. Therefore, by simply modelling of context, the game greatly magnifies perceived danger. In most case, the player could simply hold their ground and execute a melee attack (which is typically high impact as Justin Pierce predicts). However, in most cases incoming melee attackers forces player backwards (out of cover) and requires her to reorient to the situation. 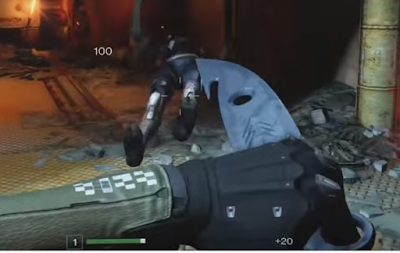 Player vs Melee - A Magnification Tool

Establishing ranged and melee enemies in this way also allows the game to establish the difficulty of an encounter to be greater than the sum of it's parts. For example, placing an enemy with high damage ranged ability with waves of melee attackers forces players out of cover periodically exposing them to greater damage risk from the ranged attacker. This forces the player to think about enemy prioritization in terms of distance, impact to cover etc.

Two Ranged and One Melee Enemy

Likewise, this perceived risk can also be mitigated by enemy zoning. Flanking players can create a heightened sense of danger and challenge. However, even though the perception is that she is fighting the enemy on all fronts really the danger is only from one set of enemies at a time because they have been demarcated to certain bounds.

The ranged - melee interaction systems also scales to different play styles based on risk taking appetite. Slower or weaker enemies can be slowly chipped away from behind cover or rushed and meleed aggressively. 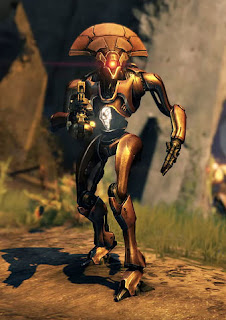 Other instances of high risk, high reward systems are heavy ammo, blaster and super attack systems. While almost all of the player's attacks are hitscan based, these are noticeably projectiles. To maximize probability of success this needs the player to break cover, get to a suitably close location, and then execute the attacks.

Establishing high risk, high reward systems however only establishes support for different play styles. To encourage certain types of play behavior separate mechanics are required. Essentially the player needs an escape mechanism, when a high risk plan looks like it may go awry. In Destiny, the double aerial jump serves this purpose (which also serves as an innovative faster traversal mechanism as Justin identifies in his blog). 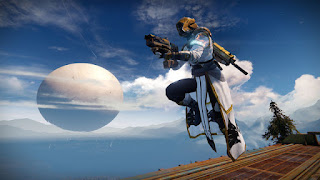 Another means through which Destiny supports different play styles is by providing an arsenal of weapon that are meaningfully differentiated. Additionally the game is balanced to ensure that dominant strategy does not emerge through the selection of certain weapon types. This type of differentiation allows the player to parse through the arsenal based on desire rather than optimizing utility. This also allows the player to seek specific weaponry and results in enhanced satisfaction when it is found. 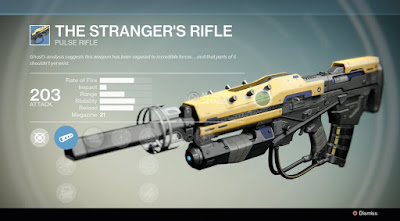 And finally, another system that encourages risk taking behavior and free form movement is cover. Cover is non sticky so the player's transitioning through cover is uninterrupted. Conversely there is uncertainty involved in whether cover is fully blocking attack for the same reason. The level design is such that cover is always accessible within a few seconds of movement which means players are freely moving through locations as opposed to mastering location maps. This also allows the player a basis to prioritize enemies, i.e., enemies that invalidate cover take higher priority. Emergent strategies from this system are shuffling through cover to surprise enemies from the side.