In an article titled 'Designing Game Narrative', Terence Lee speaks quite disparagingly about story in Tomb Raider, and indeed most modern game narrative. It is ironic then to hear Jonathan Hamel, Tomb Raider Lead Systems Designer, discuss at GDC 2013 how emotional synchronization between the player and Lara was in fact the primary design goal for the multi-million dollar project. Furthermore he goes on to generalize that creating ludo-narrative resonance is a usable yardstick to evaluate how meaningful gameplay feels to the player. He even states the science behind this phenomenon. In a nutshell, Princeton reviewers found that in MRI scans with storytellers and listeners that have matching neural patterns as the story is being told, the odds of accurate recall in the listener greatly improves. 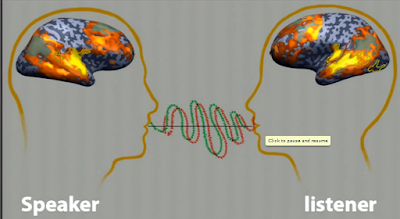 Nevertheless, this blog is not intended to dwell on the high level. Instead, I'd like to describe one development pillar in terms of how Hamel breaks down emotional synchronization as a goal into systems design. Additionally, I'd also like to evaluate my experience of playing the game compares to Hamel's claims. Broadly Hamel describes three systems categories for Tomb Raider. 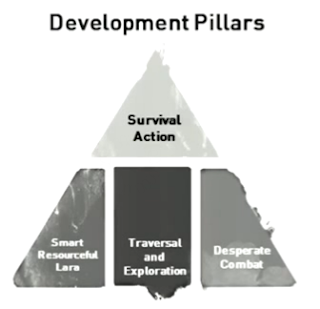 TALK - The initial plan for Tomb Raider was to have a primarily ranged vs melee combat system, as in most previous games from the franchise. 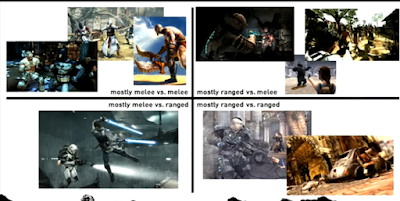 However, the emotional goal for combat system was to feel engaged in a desperate struggle for survival. A melee vs ranged combat system entails a lot of backing away from incoming enemies. Not a very compelling system for players to feel engaged in a desperate struggle. Instead a ranged to ranged system was far more compelling way to elicit this emotional synchronization. This change in battle style caused the team to reevaluate fundamental thematic elements. Enemy types shifted from zombies to human squads in order to better fit ranged to ranged combat.

This then necessitated fluid cover systems, patrol type squad behavior etc. The design of the cover system itself was further influenced by emotional synchronization. In order to capitalize on player perception of Lara as a nimble agile character, the cover system was made non-sticky, which means she would automatically enter and exit cover without the  requirement of a button press.

ANALYSIS- The game does have both elements of charging and ranged enemies, with the balance working nicely for the most part. Charging enemies definitely do force the player backwards, however the effect is not necessarily as Hamel describes it. There is a sense of desperation involved trying to align the reticle and fire as the enemy charges in. There's also a element of decision making involved in when to stop aiming and instead use the roll away option. Once the roll is completed, there's also an element of desperation involved in trying to reorient and initiate fire before the enemy starts charging again.

It's also worth pointing out that this creates an unrealistic AI system that is perfectly justified due to the fact that it creates emotional synchronization. It's completely unrealistic for an enemy such as a wolf to charge, attack once and then back away simply to redo the process. Another thing worth pointing out is that charging enemies causes the player to switch weapons in order to quickly incapacitate the incoming enemy.

The drawback of the cover system is that it allows the player to camp and take out enemies from afar. Hamel describes the introduction of a melee system and enemies throwing explosives in order to mitigate this effect. However, neither of these systems really achieve their goal. this is probably a case of data balance, level design and incompatible health systems not doing enough with the created systems. Explosives don't obliterate cover points; they simply invalidate them for a given duration of time. Additionally, Lara doesn't take any damage while rolling creating a simple dominant strategy to roll from cover to cover. To cap things off, the health system is not HP based, it is regenerative (like Uncharted). This makes it easy to hold your weapon out and wait for a hiding enemy to enter range even at the cost of getting hit. If desperate combat was the goal it seems like a HP system (like The Last of Us) would have suited the system better.

In conclusion, it's worth reminding ourselves that this entire analysis trickles down from and supports the goal of maintaining synchronization between the character and player. Pretty neat huh?!
Posted by Unknown at 10:49 AM